What’s in a name?

In 1986, a petition to change the name of Preston Street to Corso Italia was circulated in Ottawa’s Little Italy area, netting over 1,000 signatures. The name change was proposed to recognize the contributions of Italians to the community, and celebrate the area’s culture and businesses. While some, such as then city councillor Mac Harb, strongly supported the proposal, there were also concerns that the change could be confusing and might hurt local businesses.

The Ottawa Citizen covered the story: 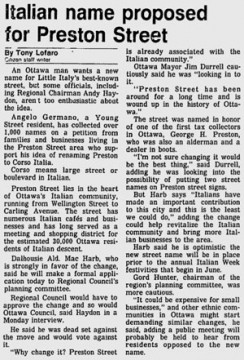 As a compromise, commemorative names were given to Preston Street (Corso Italia) and Gladstone Avenue (Via Marconi), while the official names remained the same.